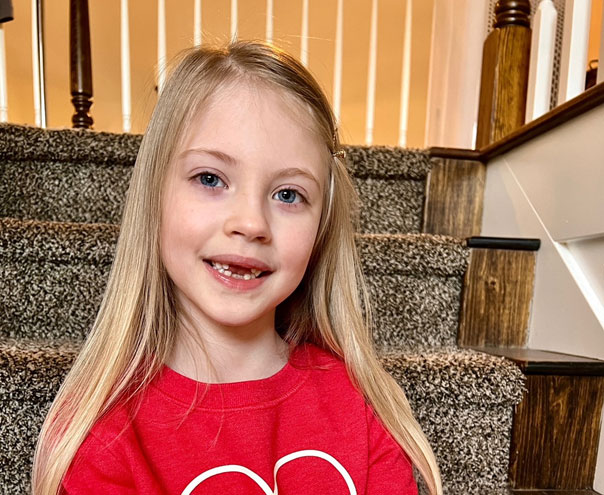 This is Sophia – we often call her Sophie-Bear or Soph-Soph. She is 6 years old. She has Complete Heart Block and received a Pacemaker in March of 2021.

Sophia from birth to 5 had no major health conditions, her heart block is not congenital (she wasn’t born with it) – we probably will not ever know exactly when or how her heart’s electrical system stopped working properly. We do know that her heart’s structure is strong and there are no other complications with her body.

As a parent, you might nearly drive yourself mad trying to ask why or how. Typically these stories have a precursor of other heart abnormalities or at least some level of awareness about a health irregularity in your child – But that was not the case for Sophia. Sophia has always done a really great job of self regulating- she’s very in tune with her body. She would play, run, dance – at full energy of course -she always knows when her body is ready to rest and have downtime. That is her normal life rhythm. She very rarely gets sick. When she has gotten a cold/flu, it would pass fairly easily. She seemed to recover so quickly from any type of typical childhood illness that would enter her body. She had never once complained of a headache or head pain in her entire 5 years.

One day after school, Sophia came home and said her head was hurting terribly and that she had a headache. She rested on the couch and I called our pediatrician. The pediatrician’s office said to call again the next day if her headache didn’t go away or if things got worse. Her headache presented similarly to a migraine. We decided to have a check up since this was so out of the ordinary for her. During her checkup I was asked a question that suspended time for a moment -“Has anyone ever mentioned Sophia’s heart rate to you?” –  All of these replies ran through my mind – (No! Why would they? What is wrong?) -I simply said, “No, no one has ever mentioned her heart rate to me.” I wasn’t prepared for the rest of the conversation, my child had always been “healthy.”

I was told that Sophia’s heart rate was well below average for her age. Her pediatrician referred Sophia to see Dr. Tajchman at the Children’s Heart Center. Sophia went into that appointment being her typical self, dancing- twirling. It’s very impossible not to feel her joy, to be enchanted by her personality when you’re in her presence. Dr. Tajchman reviewed Sophia’s EKG and determined that Sophia had Heart Block, Advanced Stage 2. Sophia would wear a Zio Monitor for two weeks to get a better picture of the heart block. (She only was willing to wear it for 2 days, but that gave us plenty of data).

At this point I did endless googling – endless wondering, worrying, some crying- all of the emotions and thoughts that a parent would have when faced with such an unknown. Until Sophia’s diagnosis I can say that I had never given thought to the electrical system of a heart, or even it’s function in any capacity. Your brain doesn’t typically go to that level of thought, especially if your child behaves and appears perfectly healthy. Sophia’s results came back and things moved quickly from that moment. The Zio showed that Sophia’s heart went into many periods of complete heart block, had periods of pauses >3 seconds and at the lowest was only beating at 21 BPM. Her average rate was 48, this is far below normal for a 5 year old.

We were referred to OHSU to see Dr. Balaji and discuss a plan. It was quickly decided that Sophia needed a pacemaker. Things usually seem to take forever when dealing with any kind of medical issue, but they are very quick when it’s something serious. From the time we met with Dr. Balaji to the time of surgery was only a distance of 7 days.

Sophia’s surgery went perfectly. She sometimes refers to her pacemaker as “her generator.” She’s thriving and just as energetic and full of life as any other 6 year old. Life looks slightly different for her than it did prior to surgery, we are more intentional about the type of sports she can play. She sleeps with a monitor next to the bed that sends reports about her pacemaker to the cardiologist. If she were to have a great fall or injury to the site of her pacemaker then we would need to get her checked out, but other than that she’s just a typical,happy kiddo.

It took a long time to accept that we likely won’t ever have answers or clarity as to why this happened to her heart. We try to remain in the present and really be grateful for every step that has been taken to get us to the point where her heart is now safe!! She’s safe! If her heart can’t beat like it should, her little generator does the task and lets her heart rest. There is a sense of safety in knowing that she’s well protected by the device in her body.

We won’t ever be able to articulate our love and appreciation to each doctor that’s played a role in getting Sophia diagnosed and placed with a pacemaker. We are so thankful for all of her care team, Dr. Peoples – her pediatrician, Dr. Tajchman & Dr. Balaji- her cardiology team, as well as every other medical professional within their practices that have helped us on this journey. So this February during heart awareness month and every other month of the year, we leave you with these thoughts -always pay attention when something seems off and be so grateful for each heartbeat.